LOS ANGELES—As the Tupac and Dr. Dre classic goes, “California knows how to party…”—and the city of Los Angeles certainly showed some "California Love" during the memorable Super Bowl LVI halftime show, which helped set up a big win for the hometown Rams who defeated the Cincinnati Bengals 23-20. The iconic rap song was just one of many nostalgic hits performed during the show, which drew Dr. Dre, Snoop Dogg, Eminem, Mary J. Blige, Kendrick Lamar and surprise guest 50 Cent, and marked the first time the halftime show featured hip-hop artists as the main act.

Taking place at SoFi Stadium—the buzzy new 3.1 million-square-foot venue in Inglewood, Calif.—the show paid tribute to nearby neighborhood Compton, Dr. Dre's hometown, which is considered one of the birthplaces of rap music. The sleek, all-white stage design featured a series of connecting rooms nodding to various Compton landmarks, including Tam’s Burgers, Dale’s Donuts, the Compton courthouse and the nightclub Eve After Dark, where Dr. Dre used to perform early in his career. Details like vintage Chevrolet Impalas and a massive photograph of the city rounded out the tribute to the City of Angels.

Overall, the show drew positive reviews, with the event producers we spoke to praising the A-list performances and clever scenic elements. Some viewers, though, longed for bigger production values and more innovative uses of technology. Here's what else our experts had to say.

I felt like this was one of the better-produced halftime shows. Nailing audio and angles for both a live and remote audience is inherently challenging (understatement I'm sure!), and I feel like they did a great job especially considering how many different artists were there. It was consistent which helped its power. This in turn helped me really focus on busting out the high school prom moves.

I agree @Samantha Minish! I especially appreciated how large and varied the stage was  The fact that each artist had their own unique setting made it feel much more immersive and kept me guessing what was coming next. Would love to see more performances like this in the future!

It's interesting to hear how each of us were impacted. What an immersive journey they took us on! Kudos!

IT and Networked AV

Earning a Seat at The Table

Going Beyond the Table 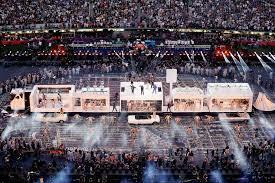 Loved the nostalgia or maybe it wasn't really your jam, Biz Bash shares the grades of Super Bowl LVI from top experts.