Korean University, Israeli tech firm using infrared to send power over the air
SIXTEEN:NINE
Follow
Like Liked by Lisa Matthews, CTS and 1 other
0

One of the reasons ops and deployment people who are active in digital signage and AV companies tend to insist on doing site visits and surveys before starting on projects is that they want to see what they're up against with the location, and check on things like the availability of power.

Often, there's no power where it's desired - like in the aisles of big box retail stores. Which means more cost and time.

That's had people dreaming that one day power would be available wirelessly - so that a display could go where it needs to go, without all the capital costs and labor of running electrical wire and conduit. That dream, it appears, is starting to become a reality.

Researchers at a South Korea university have discovered and started talking about a method to wirelessly transmit power, over the air, to devices up to 30 metres away. “The ability to power devices wirelessly could eliminate the need to carry around power cables for our phones or tablets,” research team leader Jinyong Ha, of Sejong University, tells Optics Express. “It could also power various sensors such as those in Internet of Things (IoT) devices and sensors used for monitoring processes in manufacturing plants.”

The system uses infrared light to safely transfer what the researchers call high levels of power. Lab tests confirmed transfers of 400 mW light power over distances of up to 30 meters. The infrared light fires from a transmitter  to a receiver, where a photovoltaic cell absorbs the light and produces electricity.

Right now, the set-up has the juice moving wirelessly to power things like IoT sensors, and the proposition is that it can be boosted to the levels necessary to charge mobile devices. Researchers also think it will gradually get to a power level that everyday devices - like TVs - can be supported.

The researchers also stress there are methods in place that make the power delivery safe, as I suspect many reading this are wondering if they would burst into flames if they walked through the path of the beam.

While these results are coming out of a lab, there's already an Israel company marketing a B2B wireless power solution and a small shelf-edge video display intended for retail and hospitality digital signage applications.

Wi-Charge says its over-the-air wireless charging solution "can charge devices in a 30-foot range, eliminating the hassle of cables and batteries to give end-users the freedom they crave, and product designers the power they need to usher in the next generation of mobile and smart devices. Wi-Charge systems and devices are already deployed in multiple commercial venues in the United States, Israel, and around the world."

Wi-Charge has partnered with a restaurant furniture supplier, Charter House, to develop "a full-color video display with built-in over-the-air wireless charging that allows marketing teams to promote and engage their customers right at the table and bartop. With the wireless charging capabilities, restaurant owners do not have to hardwire each table or worry about the displays ever losing power. The displays can be loaded in real-time with promotional content such as in-meal offers, or special deals on a future visit to the restaurant. This helps create closer connections with customers, differentiates the restaurant's services, and drives greater revenue."

Wi-Charge says its transmitter is "certified safe for consumers in all usage scenarios. Power is delivered only to the target device and does not bathe the environment with unwanted radiation."

There are, of course, some wireless options already on the market, using batteries. For larger displays, that requires plugging them in overnight to re-charge. For smaller, e-paper displays, like ESLs or meeting room signs, that means swapping out batteries at some point. The proposition here is that no swap will be needed.

The Devil's Advocate point here, perhaps among a few, is that this set-up requires a receiver - which means extra electronics. So it would not just work with equipment already manufactured or in the field. Maybe a dongle at some point? I dunno. Don't look to me for engineering smarts. 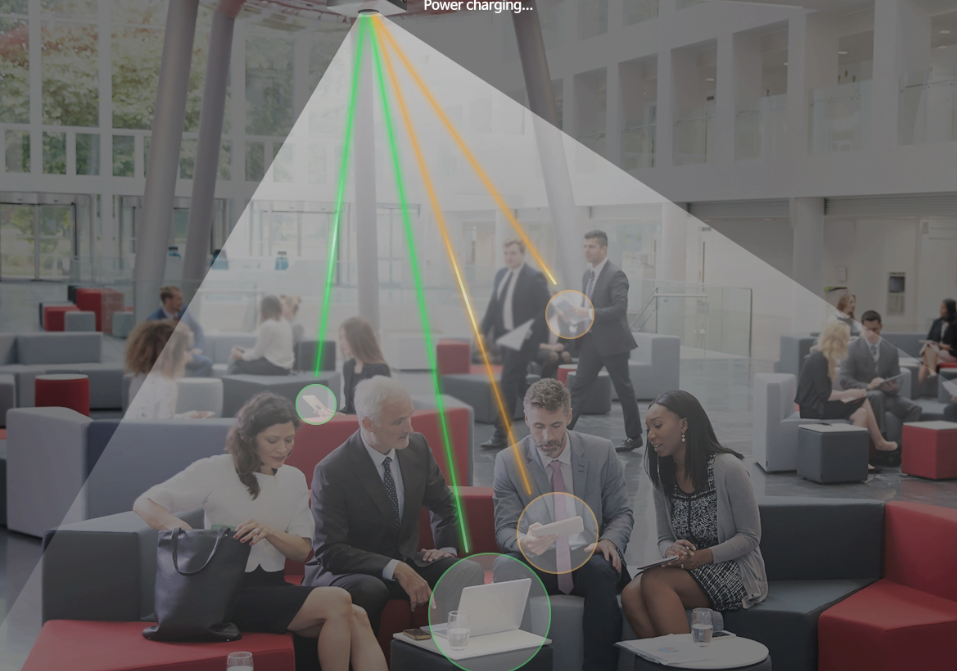