A London-based start-up called Cloudshelf has formally launched a no-code, automated platform it says bridges online shopping to in-store by extending a version of retailer and brand e-commerce websites to touchscreens.

The idea is that smaller retailers who don't have the money or resources to build made-for-purpose in-store digital experience can instead use Cloudshelf, and push a version of its cloud-based e-commerce site to kiosks or tablets inside their stores. The company, started up last year, has done its first e-commerce platform integration with Shopify, the Canadian e-commerce giant that has more than a million customers globally.

Using in-store retail displays, says the company in PR, Cloudshelf integrates with the Shopify app-store, to enable retailers to bring their online presence into their shop. The whole process is optimized and automatic (no code) and gives retailers the opportunity to display and guide customers through their entire product range, which might not be available in-store.

The proposition with having interactive screens inside bricks and mortar stores is that a lot of money may be walking out of stores because shoppers "who planned to buy something then leave, because something is out of stock in the store, or out of sight, or there is no one available to serve them, the shopper then leaves the store. Cloudshelf shows the in-store shopper the product they want, and helps them buy it for home delivery or in-store pick up."

The start-up has done trials with companies in both the UK and France. "The Cloudshelf platform has proved its accessible value in providing an omnichannel solution generating thousands of pounds in additional revenue income. Trialists also reported that Cloudshelf has now become the additional sales associate they couldn’t afford. Some reported that it would help them bring forward their plans for events and pop-ups as they were able to rely on Cloudshelf to display the full range, without needing to invest in more stock."

“At a time when the cost of living crisis has impacted consumers’ ability to spend, it becomes even more vital for retailers to ensure they don’t lose out on a sale," suggests Giles Corbett, founder and CEO of Cloudshelf. "We are enabling independent and scale-up retailers to digitize the in-store experience at a fraction of the cost paid by larger brands. Displaying a retailers full inventory of products, in an intuitive and easy-to-manage service, ensures that consumers can find and order the products they want, eliminating the walk-out effect and increasing the sales a retailer can make,”

“Cloudshelf has enabled us to bring our entire range of products virtually in-store," adds Deepesh Patel, Area Manager at Billboard Furniture. "This means two things: one, customers can explore many more products than we’re able to physically stock, and two, they are significantly more likely to find, buy or order what they want. The simplicity of Cloudshelf to deploy, literally within minutes, and the increased revenue it generates for our business, is a no-brainer.”

This is not an entirely new idea, but time and the technology advances that happen along the way have made these kinds of efforts easier and better. I remember walking around the NRF retail tech show in New York a few years ago and seeing big e-commerce companies, like eBay, showing versions of this on touchscreens. What they were showing was shovelware - shoveling a website, pretty much unchanged, on to an in-store screen, with no real nod to the different shopper dynamics, interests and needs inside the store, few or no tweaks of the UX, and nothing in the way of remote monitoring and management tools to keep the things working.

The difference here is that the Cloudshelf platform was built for this purpose, and is designed as a no-code platform that allows customers with few or no developer chops to sync up their Shopify site and use design wizards to put together a viable touchscreen experience.

The platform closest to what Cloudshelf is up to is probably France's Intuiface, which is also a no-code platform aimed at making and managing interactive experiences. Intuiface has what it calls an API explorer that could, in theory or perhaps in practise, connect to Shopify. But where Cloudshelf is expressly focused on retail, Intuiface is broadly focused on enabling interactive for all kinds of use-cases. 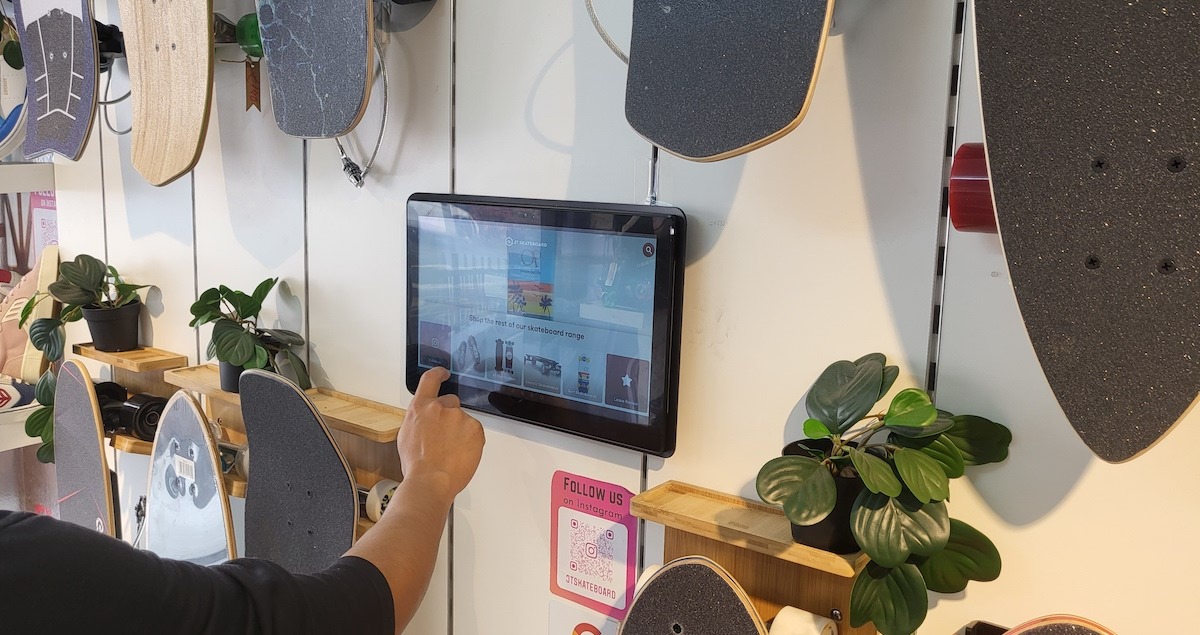