Units come in a range of pixel pitches as low as 1.2mm; have what company says is unique, fully waterproof exterior
SIXTEEN:NINE
Follow
Like Be the first to like this
0

I tend to be very reticent to go with claims that something is a world-first, because there's almost always something else that actually was first, but a new LED display set-up from The LED Studio is definitely among the first of its kind, and an indication of what's going to come (probably) in a big way.

Called the AegisPRO, the units come in a range of pixel pitches as low as 1.2mm, and have what the company says is a unique, fully waterproof exterior.

The display, says The LED Studio, "has been crafted for close proximity viewing and is available in low pixel pitches of 1.5mm, 1.8mm and 2.5mm. The LED Studio, powered by manufacturing partner VOD Visual, has developed a new proprietary casing for the LED board which makes this display the first to require no additional cladding or overlays for use outdoors."

This utilises The LED Studio’s sustainable LED design to deliver 40% less power consumption compared to traditional LED displays, making it not only more energy efficient, but also giving it a much longer lifespan and keeping running costs low. The display runs cold even at an impressively high 4000 nits brightness, negating the need for noisy and energy wasting external air conditioning.

The AegisPRO is a scalable solution, available in custom sizes to fit the desired space. It is also designed into a freestanding unit with two primary sizes, 86” and 130”, delivering a 16:9 aspect ratio with the option of landscape and portrait orientation. The kiosk solution features a proprietary casing to create an all-in-one, secure solution.

The AegisPRO can also be installed as a double-sided kiosk and has an ultra-wide 160 degree viewing angle, extending the engagement period for passers-by.

Rob Bint, CEO of The LED Studio, adds: “The AegisPRO kiosk is bringing new narrow pitch and high brightness LED display options to DOOH locations. We have packed this into an all-in-one kiosk solution, creating the ideal display solution for those interim areas between transportation terminals and guests reaching their destination to provide wayfinding information and location guides."

I have seen numerous free-standing LED totems at trade shows, including some that can be linked to make poster shapes. But I am not sure, at all, that they're suitable for outdoors. Certainly, fine pitch LED modules could be integrated into outdoor enclosures, and LED has been widely used for outdoor projects like ad billboards and stadium scoreboards for many, many years.

So again, I'm reluctant to go with the world's first claim, but certainly think as the costs of fine pitch keep coming down, LED may replace LCD for at least some outdoor advertising applications. It will take longer, I think, for them to replace LCDs for applications like drive-thru menu displays - though 1.2mm probably shows text just fine for people ordering from inside their vehicles.

The company, at least as I am pulling this post together, does not have a product page up for the AegisPRO, but does already have a page for the Aegis - which is a freestanding totem unit that has a 1.9mm flip-chip LED screen in an enclosure, protected by Gorilla Glass.

I did a podcast with The LED Studio last year ... 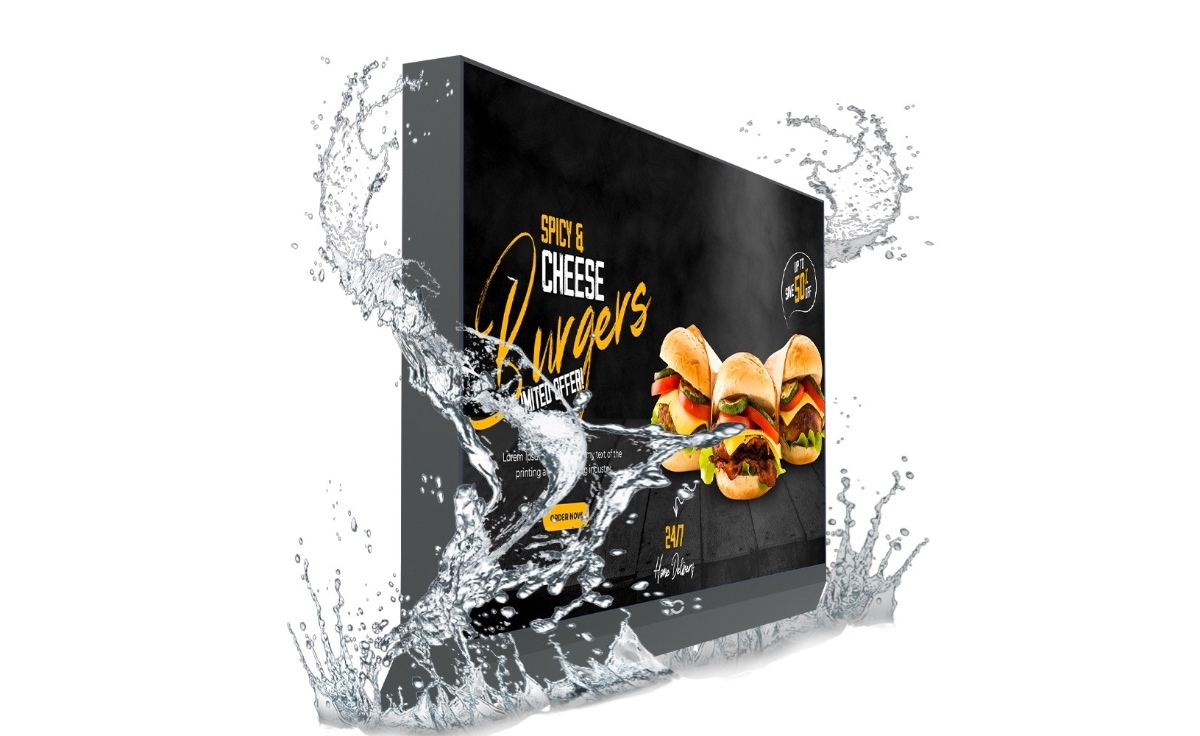 Units come in a range of pixel pitches as low as 1.2mm; have what company says is unique, fully waterproof exterior