Chicago-based Upshow has formalized its digital signage options for the so-called "back of house" in restaurant businesses - enabling displays in kitchen, break rooms and other areas where it's possible to  communicate with steadily on-the-go workers.

Called Upshow Shift, the platform makes it possible for workers to view and respond to real-time information via in-venue displays and their mobile devices, with goals of measurably improving employee engagement, training completion speed, and productivity. Screens are seen as an optimal way to get important messaging in front of people who are deskless, who work shifts, and don't always come in and leave at the same times. It's also a way to deal with the high "churn rates" - aka staff turnover - in that industry.

The platform enables the predictable stuff like welcoming new staffers and celebrating high-performing employees, but screens can also do things like reflect real-time KPIs and put up notifications for information like extra shifts available.

Upshow describes its overall offer as an in-venue entertainment and marketing platform for retail and hospitality businesses. Unlike a lot of other start-ups who have tried to crack those markets with advertising-driven, free-to-venues screen networks, Upshow is fee-based and focused on hyper-targeted marketing and interactive entertainment, paired with analytics. The company has been steadily adding more and more solutions for data-driven messaging, as well as communications aimed at staff, behind the order counters and kitchen doors.

UPshow says Shift is already being used by whale QSR restaurant clients like Burger King, Buffalo Wild Wings, Dave & Busters and Little Caesars. The company uses Chrome devices for its content play-out, and the solution is in about 11,000 locations, with about 30,000 screens in all.

I think this is smart. There is no end of options for putting digital signage in QSR and fast casual restaurants, but most are just management software and templates, or purely a mix of streamed content channels and locally managed templates. The generally low wages in the restaurant industry result in a lot of staff turnover and a steady need to inform, train, motivate and ideally retain good people - which is hard to do with traditional means like staff meetings, when staff are on their feet and the kitchens and service areas are constantly buzzing.

Top 6 Audiovisual Stories of the Week 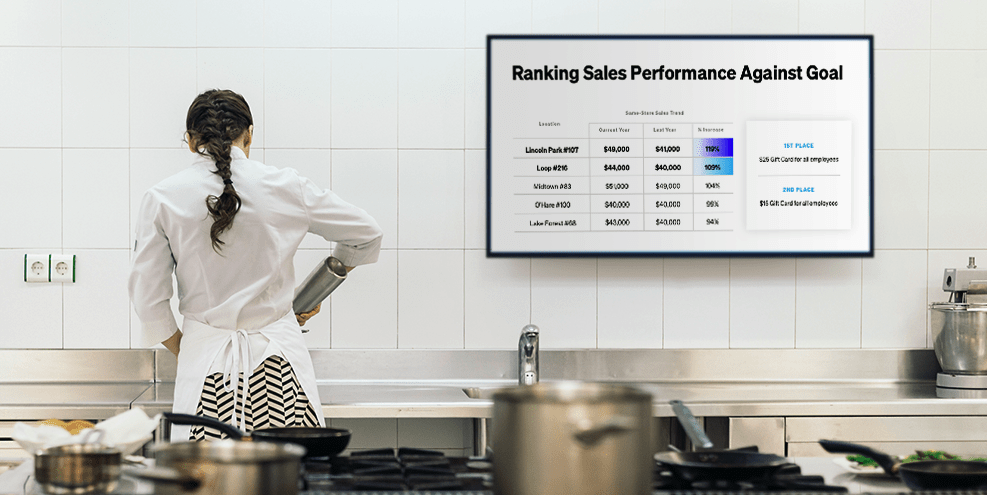